Ghee, Gold Nugget Ghee, has been used for thousands of years, originating in ancient India to prevent butter from spoiling. It is truly an “ancient” health food (and not a fad)! Ghee quickly was integrated into the diet, into ceremonial practice and into Ayurvedic healing practices. It’s believed to promote both mental purification and physical purification through its ability to cleanse and support wellness. Ghee benefits the body both inside and out, and is actually used topically to treat burns and rashes as well as to moisturize the skin and scalp. Much like coconut oil, it’s a versatile fat that is healthy in many ways!

Ghee is the same high-vitamin butter oil that Weston A. Price was using to heal his patients’ teeth in conjunction with raw milk, liver, and fermented cod liver oil. If it’s made of grass-fed butter, it’s a great source of Vitamin K2. Weston A. Price was calling it Activator X, but it is now known that it was actually the same thing as Vitamin K2.

Gold Nugget Ghee is committed to bringing people the highest quality ghee available on the market.  Butter is sourced from Northern California, which provides a unique rainforest ecosystem that allows cows to happily graze on green grass ALL YEAR long.

Gold Nugget Ghee began with a vision by founder, Daniel Draskinis, to reconnect people with nutritious and healthy fats. Daniel first became aware of ghee during his introduction into the Paleo movement when he found his own optimal performance eating lots of healthy fats. As a rock climber and an ultra marathoner, he wanted something that would fuel and sustain his adventures. Recently he has competed in the 50 Mile North Face Endurance Challenge National Championships and the Antelope Canyon 55k Ultramarathon.

Gold Nugget Ghee donates 5% of our net profits to Heifer International, a charity that gives families livestock and training to help them create a sustainable income.

The idea for Gold Nugget Ghee was birthed during a trail race in 2012 when Daniel was a vegetarian that was eating a high-carb diet consisting of a lot of sugars, starches, and grains. Upon noticing his weak performance and hitting the “wall” many times he realized there must be a better way. Diving deep into the research he discovered fat-based diets and experimented with this nutrition strategy. He incorporated a 60-70% fat-based diet and Daniel noticed that it was perfect for his athletic performance, daily life, as well as all day brain power!

Gold Nugget Ghee started because of a strong passion of making ghee! Daniel discovered it in his research into Ayurvedic medicine, which labels it as a cure-all for just about every ailment in the body. Daniel was unsatisfied in what he was finding in the store so started making his own. Daniel made ghee regularly every couple weeks. Friends wanted to buy some too and with the greater demand came the idea to start Gold Nugget Ghee!

Gold Nugget Ghee has been Keto Certified by the Paleo Foundation. 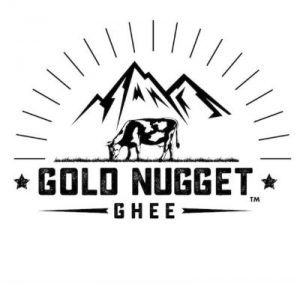